We specialize in a broadly defined administration and maintenance of various database and transaction systems. We perform tuning of database engines based on a dedicated customer preferences and requirements.

Our experts possess adequate competences as well necessary certificates.
We always perform necessary backups of databases, minimizing the risk of information loss.
We constantly improve our skills and qualifications.

We offer a lightweight, powerful and efficient solution for the so-called middle layer. Our system provides clear and intuitive Web interface, designed both to administer individual server instances as well for testing specific business logic based on a selected instance.

Apart from the administration panel, the solution also supports a number of tools (shell scripts) allowing for the manual interaction with the server using the command line interface (i.e. creating a new instance, a review of running instances etc.).

Our server can with success be applied on the basis of three possible deployment scenarios: 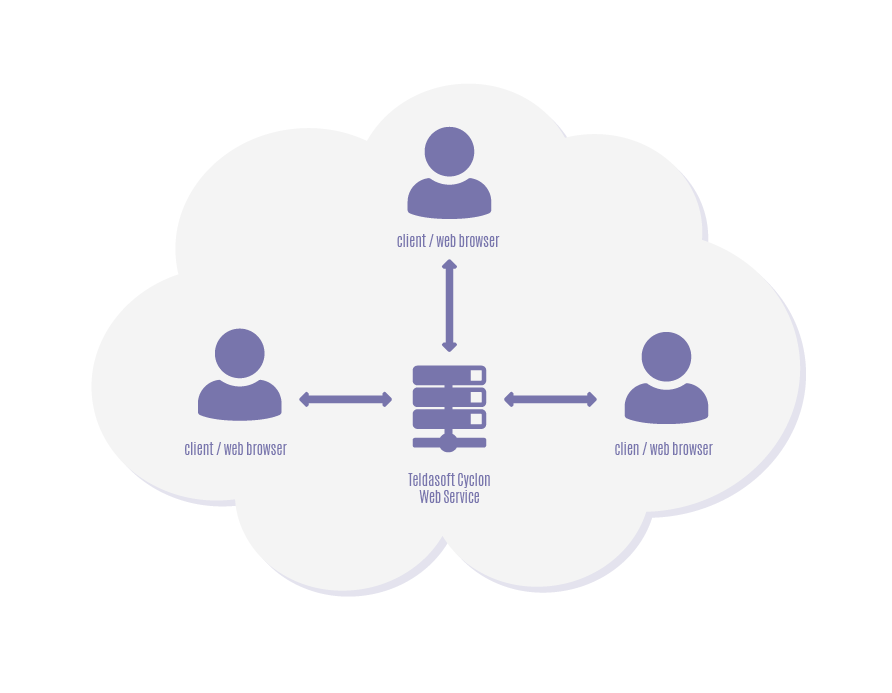 Server in three-tier architecture, which processes requests, executes the customer related business logic and sends proper responses back to the clients. 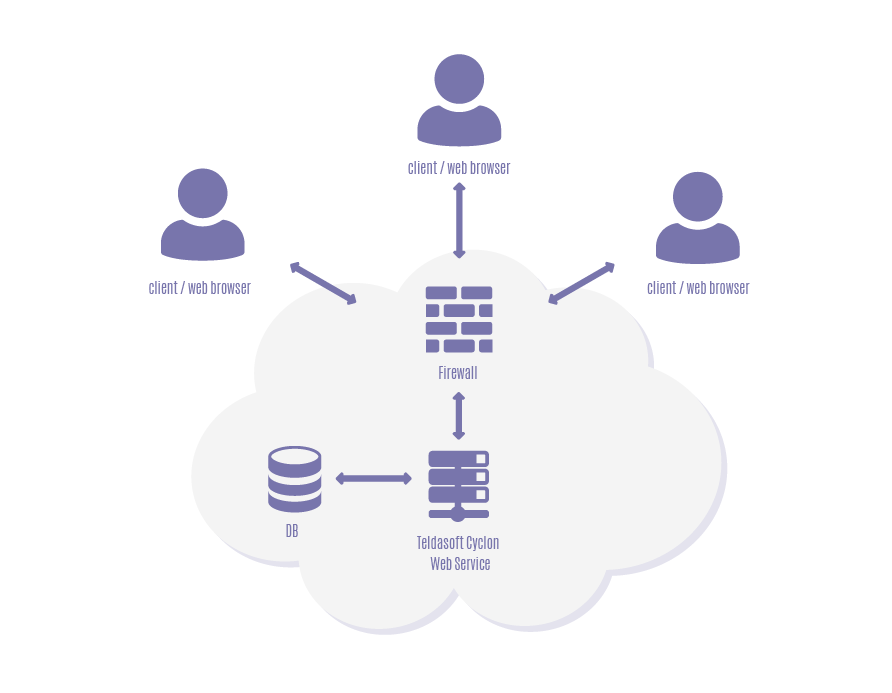 Web-based Application Server (WAS) dedicated for web applications, generating dynamic HTML content, or content of other type specified for the application logic. 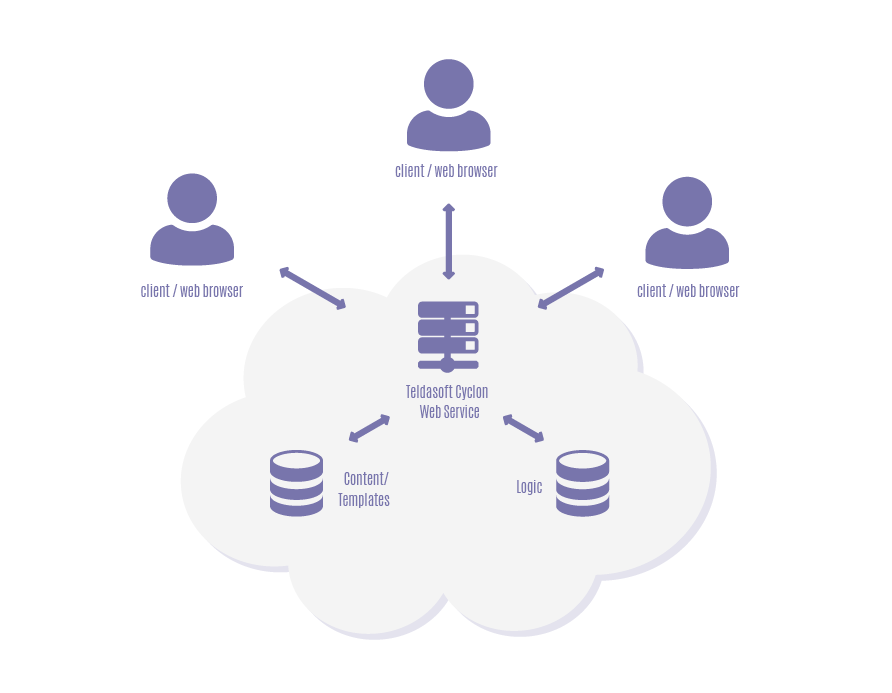 Below an example of (Cross-Domain) request, populating the data in Grid component

We are an expert in the offline solutions, offered primarily for the telecommunication sector and not only. We have many years of experience in implementing complex billing systems (Offline Billing, Fraud Detection) for the various telecom operators. Over the last 10 years we consistently gained both knowledge and experience taking an active part in implementing offline modules used by the known billing system vendor, for one of the premium offline telecom operators in Germany.

We have an excellent understanding of the telecommunication sectors in the DACH countries (preferably in Germany), with focus on the Offline market as well Revenue-Sharing business models.

In addition to the term Offline, we possess extensive knowledge of the MVNE/MVNO segment. Only in this specific case, we participated in several projects for one of the German MVNO telecom providers, for which we carried out a dedicated “provisioning” module, enabling for the automation of business processes based on the SIM cards concept.

The following slide gives an overview of the business model supported by the mentioned offline billing system. 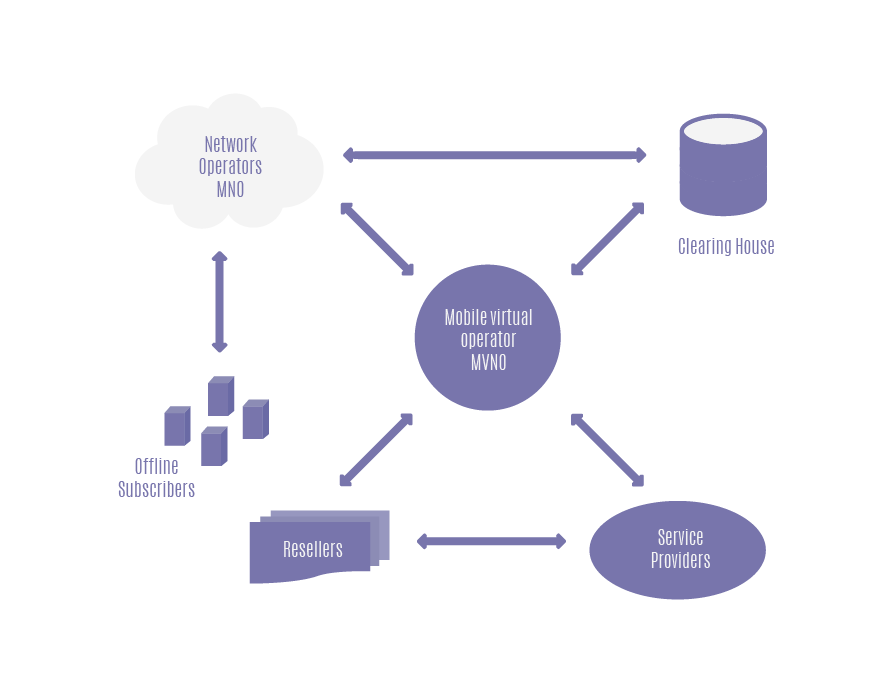 We offer own solutions (Proof of Concept) allowing for a quick and responsive integration with any existing billing system.

Together with WM Software Development Martko, we participate in development and production works for the Enercon group.
Currently, backend systems are being developed (support of internal customer databases) along with dedicated applications for mass data processing based on sets / samples
measurement data. In addition to the development work, we support the customer IT department on an ongoing basis.

Together with our partner Take5 (currently Mamoko Technologies Sp.z o.o.), we implemented a complex application for the Aluprof S.A company, being a part of the Grupa Kęty S.A. group, specializing in the production and manufacture of broadly understood aluminum systems for construction. The offer of this company includes window – door and facade systems as well as roller blinds or gates. 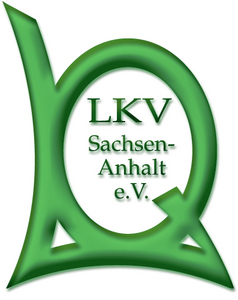 New implementation of an In-House system to service external customers as well internal contracting party relationships.
Analysis and design of CRM/WWS application. Consulting on site at the customer office. Data migration activities from old systems to the new environments.
Continuous maintenance of an implemented system, bug fixing as well implementation of new features.

Comprehensive deployment of a JIRA Atlassian system. Feasibility study and preparation of required environments. Consulting on site with a customer.
Developing of implementation and post-implementation concepts.

Implementation of the Warehouse system together with a Web interface for managing Goebel products, series and resources. The work was also connected with implementation of
data exchange interface with such systems as SAP. All work was carried out through the Best Case Management GmbH company, with which Teldasoft cooperates in the area of project delivery for the German-speaking clients.

Over the past years, we have gained experience in the telecommunication market in Germany, especially in so-called Offline Billing area.

The Offline market obtained the status of strong regulation in 2004 by the German organization RegTP (Telecommunications Regulator), which expressed the widespread use of the following prefixes (0190-, 0800-, 0180-, 0900-) for the needs of the Offline market. In connection with subsequent numerous abuses related to the use of the delayed payment method, RegTP decided to allow only the prefixes 0900- to enter the Offline market. The knowledge about Offline numbers, their use in telecommunications as well experience gained from the German market, resulted in the creation of our first startups.

We design Backend systems that support logic and management of delayed payments, which are just part of the Offline market.

We offer the following solutions:

This tool, mentioned by us supports the mechanism of aggregation, distribution (Split) and participation in payments (Revenue Sharing), providing numerous interfaces for data exchange with various business partners, i.e.:

This tool complements the above mentioned system with so called Fraud module, i.e. limiting fraud in the area of using Offline numbers as well limiting strictly financial frauds.

We use for this an advanced heuristic logic supported with Reconciliation mechanisms to analyze input/output data and their expected results.

In 2015-2016, together with Take5 (currently Mamoko Technologies Sp.z o.o.) company, we implemented a complex application for the Aluprof S.A company, being a part of the Grupa Kęty S.A. group, specializing in the production and manufacture of broadly understood aluminum systems for construction. The offer of this company includes window – door and facade systems as well as roller blinds or gates.

The goal of the project was to create a DXFConverter application (Windows PC Desktop) for processing CAD vector files (DXF) to support the process of drawing dimensioning process based on a generated so called dimension report. The application used publicly available PN, ISO, DIN standards and enabled the user to provide, i.e. dimensional deviations, which were included both in the final report as well in the output image file (JPG, PNG).

The application was built based on a .NET/C#, Winforms, MSSQL Server 2012 technology, using the third-party libraries such as the CAD library (CadLib) of the Woutware company, or the DWG2DXF driver (Theiga).

Fig-1: Screenshot from the running application (in foreground, the PN standards window):

Fig-2: Screenshot from a DXF file processing session (in foreground a window with converter settings): 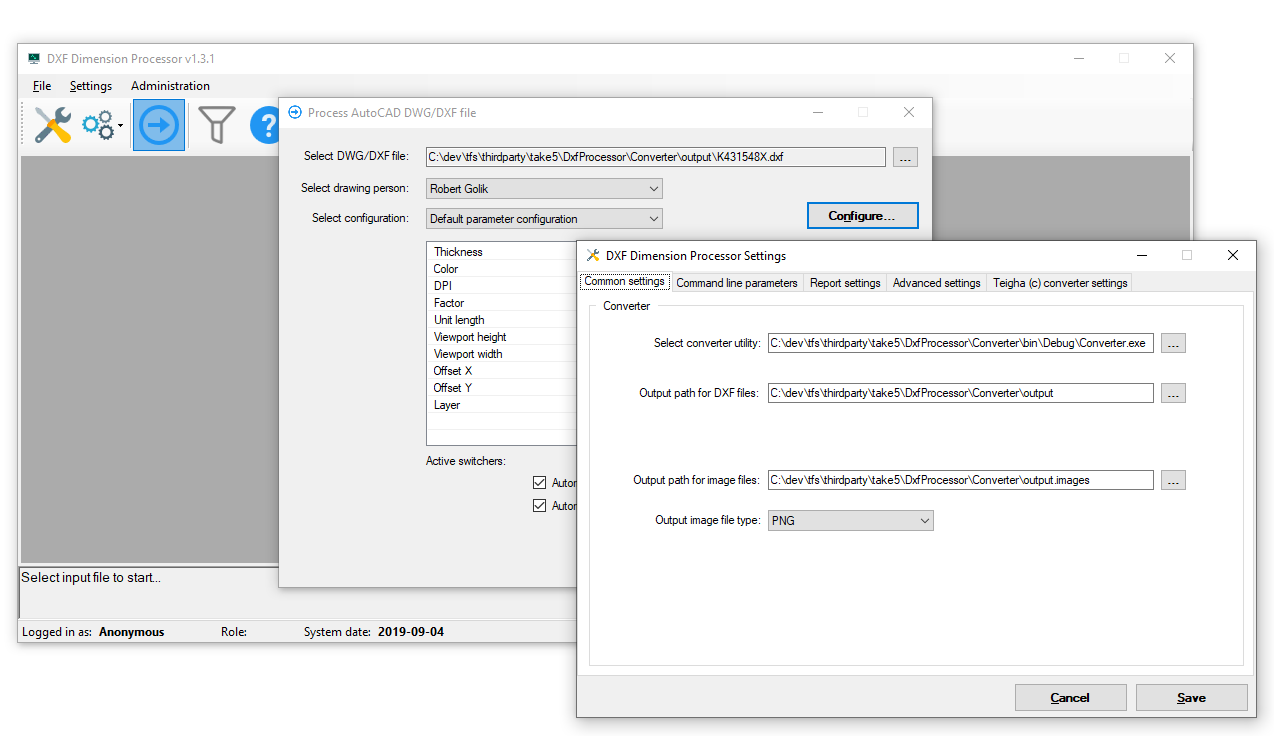 Fig-3: Screenshot from the complete DXF file processing session (dimensions report as well the generated PNG drawing to be seen in foreground): 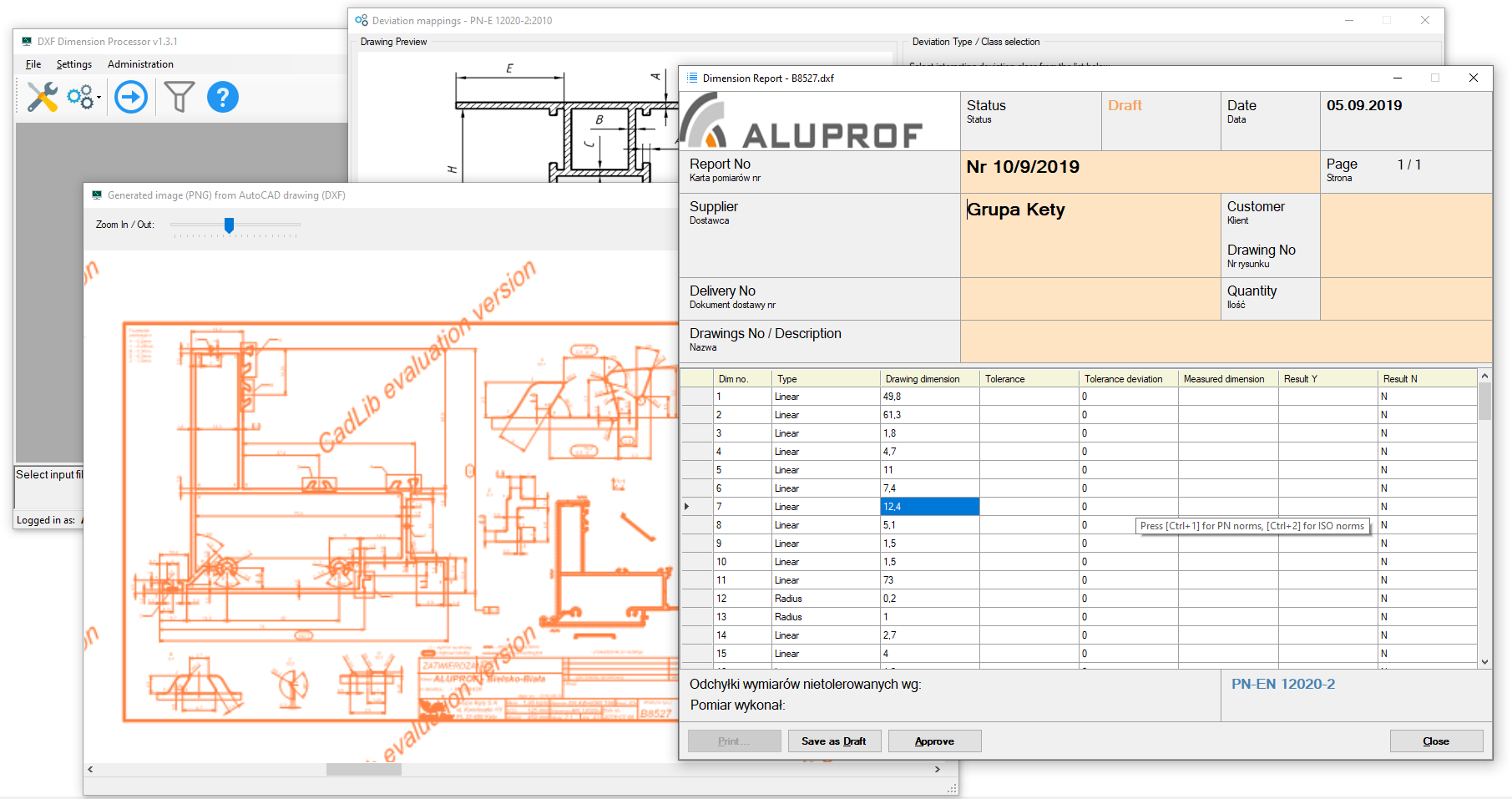 We contribute to success of many companies